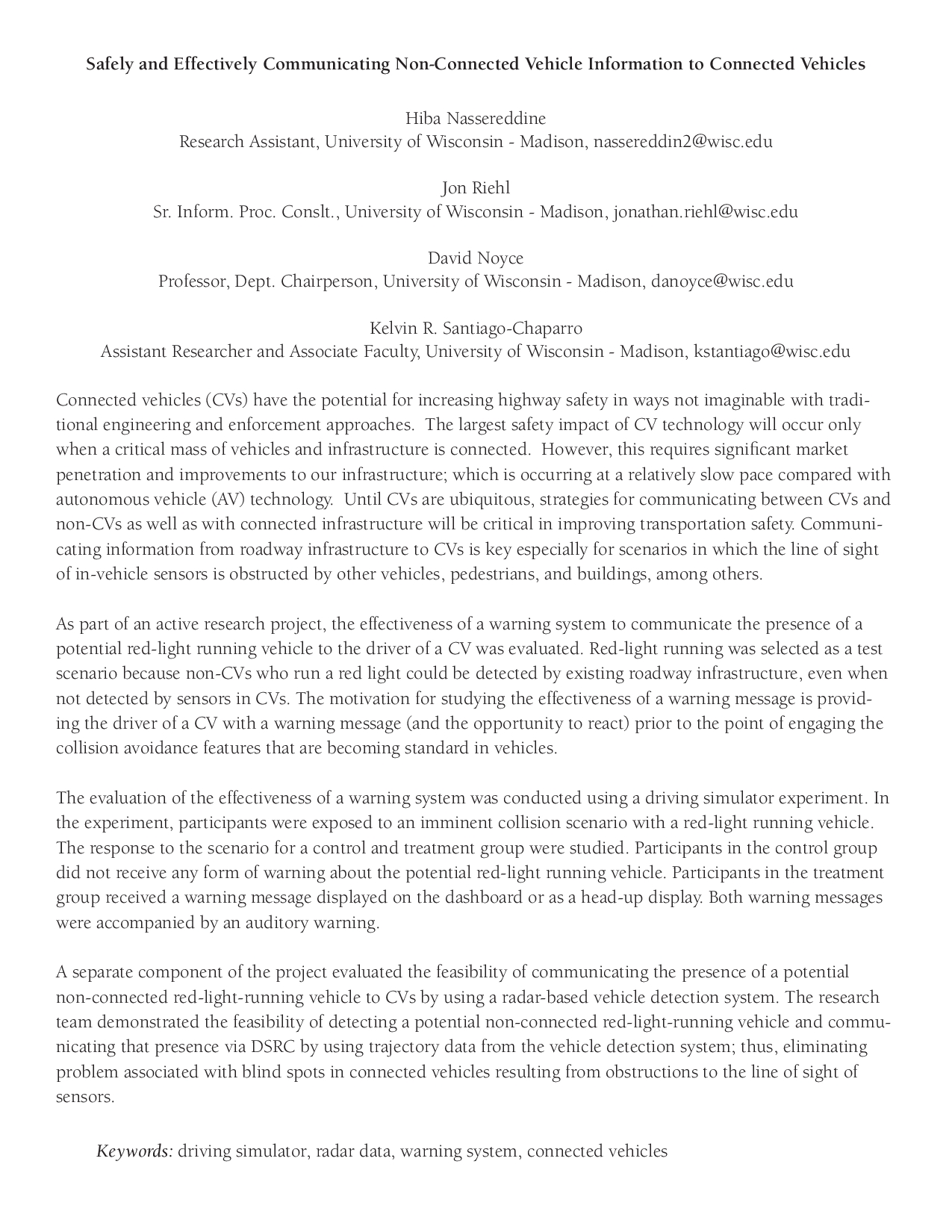 1 Safely and Effectively Communicating Non
Safely and Effectively Communicating Non-Connected Vehicle Information to Connected Vehicles Hiba Nassereddine Research Assistant, University of Wisconsin - Madison, nassereddin2@wisc.edu Jon Riehl Sr. Inform. Proc. Conslt., University of Wisconsin - Madison, jonathan.riehl@wisc.edu David Noyce Professor, Dept. Chairperson, University of Wisconsin - Madison, danoyce@wisc.edu Kelvin R. Santiago-Chaparro Assistant Researcher and Associate Faculty, University of Wisconsin - Madison, kstantiago@wisc.edu Connected vehicles (CVs) have the potential for increasing highway safety in ways not imaginable with tradi - tional engineering and enforcement approaches. The largest safety impact of CV technology will occur only when a critical mass of vehicles and infrastructure is connected. However, this requires signicant market penetration and improvements to our infrastructure; which is occurring at a relatively slow pace compared with autonomous vehicle (AV) technology. Until CVs are ubiquitous, strategies for communicating between CVs and non-CVs as well as with connected infrastructure will be critical in improving transportation safety. Communi - cating information from roadway infrastructure to CVs is key especially for scenarios in which the line of sight of in-vehicle sensors is obstructed by other vehicles, pedestrians, and buildings, among others. As part of an active research project, the effectiveness of a warning system to communicate the presence of a potential red-light running vehicle to the driver of a CV was evaluated. Red-light running was selected as a test scenario because non-CVs who run a red light could be detected by existing roadway infrastructure, even when not detected by sensors in CVs. The motivation for studying the effectiveness of a warning message is provid - ing the driver of a CV with a warning message (and the opportunity to react) prior to the point of engaging the collision avoidance features that are becoming standard in vehicles. The evaluation of the effectiveness of a warning system was conducted using a driving simulator experiment. In the experiment, participants were exposed to an imminent collision scenario with a red-light running vehicle. The response to the scenario for a control and treatment group were studied. Participants in the control group did not receive any form of warning about the potential red-light running vehicle. Participants in the treatment group received a warning message displayed on the dashboard or as a head-up display. Both warning messages were accompanied by an auditory warning. A separate component of the project evaluated the feasibility of communicating the presence of a potential non-connected red-light-running vehicle to CVs by using a radar-based vehicle detection system. The research team demonstrated the feasibility of detecting a potential non-connected red-light-running vehicle and commu - nicating that presence via DSRC by using trajectory data from the vehicle detection system; thus, eliminating problem associated with blind spots in connected vehicles resulting from obstructions to the line of sight of sensors. Keywords: driving simulator, radar data, warning system, connected vehicles

to safely and treat steroid-responsive skin conditions. When prescribing topical steroids, it is important to consider the diagnosis as well as steroid potency, delivery vehicle, frequency of administ

Communicating Effectively When Taking and Leaving Phone and

FSM in the Foundation’s Water, Sanitation and Hygiene Strategy

FSM in the Foundation’s Water, Sanitation and Hygiene Strategy

The Importance of Listening to Children. A child's . right to express his or her views . is enshrined in the United . Nations Convention on the Rights of the Child (UNCRC) (Articles 12 and 13) . Need .

During Flood Events Using . WebEOC. ®. and the. CAPCOG . Emergency Notification System. Communicating Critical Information During Flood Events. Who is CAPCOG?. CAPCOG is the Capital Area Council of Governments..

Listen to Me! Effectively Communicating

Communicating in Teams and

Organization. s. McGraw-Hill/Irwin. Copyright © 2013 by The McGraw-Hill Companies, Inc. All rights reserved.. Communication at Zappos. Zappos CEO Tony Hsieh values open communication with staff, such as sending Twitter tweets, writing blogs, and having an office with no door..

Lessons Learned from Losses Monthly Newsletter January 2017. Many employees get injured when getting on and off some of the larger vehicles owned by municipalities. . Due to inattention, speed and rushing in an emergency, workers slip and fall when they do not use vehicle steps and handhold devices. Jumps and falls can cause strains and sprains, broken bones and fatalities. .

The Signal in the Noise. Autonomous Vehicles:. Crafting Policy to Accelerate Deployment. July 20, 2015. Larry Burns. Professor of Engineering Practice. University of Michigan. What am I hearing?. What am I seeing?.