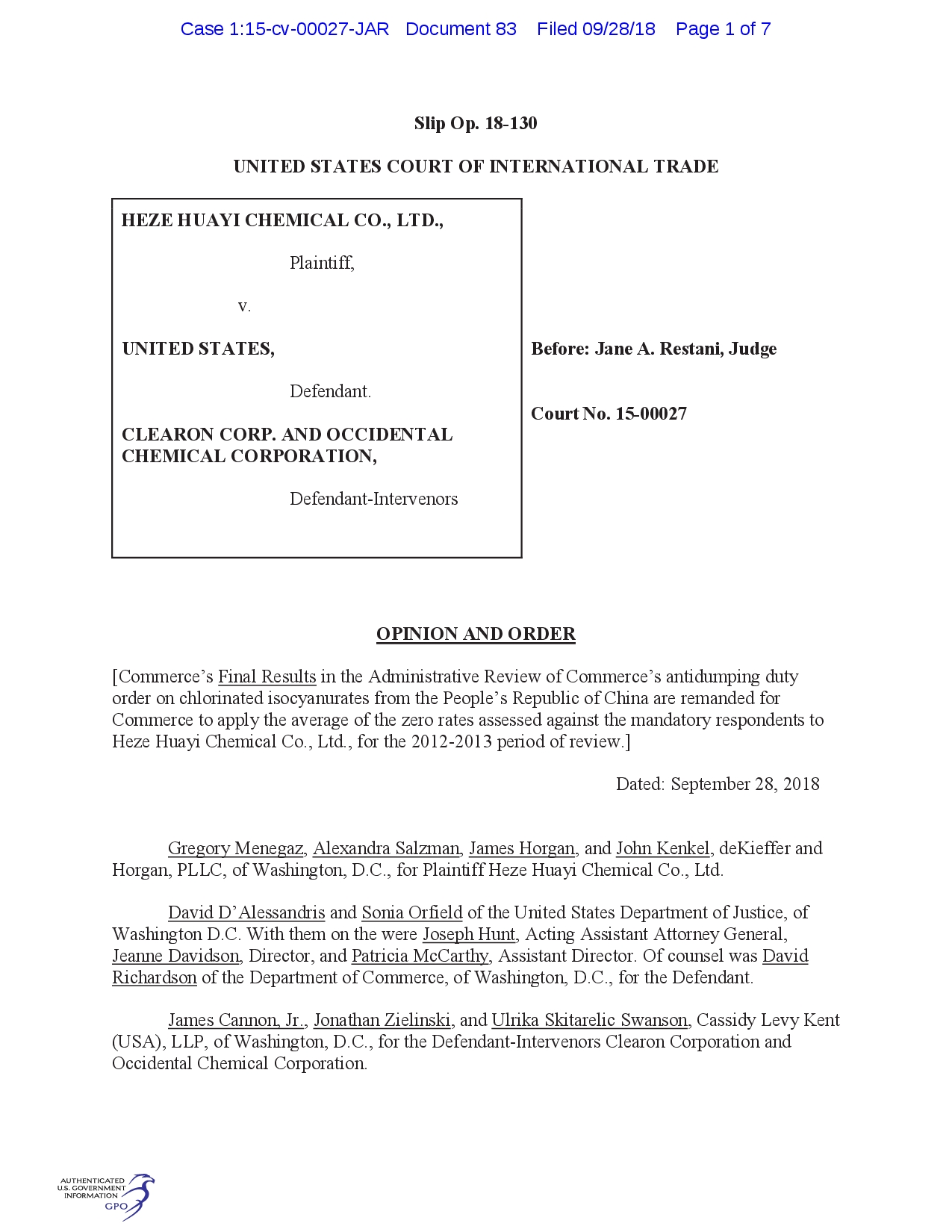 STOER SUPPORTGoPro is dedicated to providing the best possible service

HIGHLIGHTS OF PRESCRIBING INFORMATION These highlights do not include

2 d Isocyanurates from the People's R: 6/
d Isocyanurates from the People's R: 6/1/12-5/31/13 (Jan. 21, 2015) I&D Memo Plaintiff Heze Huayi Chemical Co., Ltd. (“Heze”) asks the court to remand the case to Commerce with instructions to assign Heze an antidumping rate based on an average of the zero rates assigned to the mandatory respondents or else calculate an individual margin based on record evidence. See Plaintiff Heze Huayu Chemical Co., Ltd. Memorandum in Support of Motion for Judgment on the Agency Record at 30 (Apr. 6, 2015) (“Heze 56.2 Br.. Defendant United States (“the Government”) asks for a remand in the light of the intervening decision in Albemarle Corp. v. U.S., 821 F.3d 1345 (2016). Defendants Supplemental Brief and Motion for a Voluntary Remand at 6 (June 21, 2016) (“.S. Supp. Br.”). Defendant-Intervenors Clearon Corp. and Occidental Chemical Company (“Clearon and Occidental”) argue that the case should be remanded to Commerce for it to re-open the record and make a determination. Supplemental Brief of Clearon Corp. and Occidental Chemical Corporation at 56 (June 21, 2016) Supp. Br.. For the reasons stated below, the case is remanded to Commerce with direction to assign a zero rate to Heze for the relevant period of review. Court No. 15-00027 Page 3 BACKGROUND On August 1, 2013, Commerce initiated an administrative review of the antidumping duty (“AD”) order on chlorinated isos from the PRC covering the period of review (“POR”) from June 1, 2012 through May 31, 2013. Decision Memorandum for the Preliminary Results of 2013 Antidumping Duty Administrative Review: Chlorinated Isocyanurates from the , A-570-898, POR: 6/1/12-5/31/13, at 2 (July 17, 2014) Prelim I&D . Amongst a pool of five separate rate applications, Commerce selected the two largest exporters as mandatory respondents–Hebei Jiheng Chemical Co., Ltd. (“Jiheng”) an

3 d Juancheng Kangtai Chemical Co., Ltd. (
d Juancheng Kangtai Chemical Co., Ltd. (“Kangtai”). Id. The third largest respondentHeze Huayiwas neither selected to be a mandatory nor a voluntary respondent, despite Hezeconsidered as such. See Id; Heze 56.2 Br. at 45; U.S. Resp. Br. at 45. Heze filed suit challenging Commerce’s decision not to select it as a respondent in either capacity, while the Government contended that this action was proper, in particular given Heze’s late submission for individual consideration. See Heze 56.2 Br. at 817; Defendant’s Response to Plaintiff’s Rule 56.2 Motion for Judgment on the Agency Record (“U.S. Resp. Br.15. Clearon Corp. put forth similar arguments to those of the Government with regards to the respondent selection issue. See Response Brief of Clearon Corp. and Occidental Chemical Corporation (June 8, In addition to the respondent selection claims, Heze challenged the assigned antidumping duty rate. Heze 56.2 Br. at 1727. In the light of the zero rate assigned to the mandatory respondents, Heze contended that the 53.15% rate it was assigned was not supported by Court No. 15-00027 Page 4 substantial evidence. Id. at 17 The Government and Clearon initially disagreed arguing that it is Commerce’s “general rule” to exclude zero rates when determining the proper non-respondent rate. U.S. Resp. Br. at 26; Clearon Resp. Br. at 14. In their initial briefs, Defendant and Defendant-Intervenor also argued that this practice is consistent with the statute. U.S. Resp. Br. at 2627; Clearon Resp. Br. at 13 During the pendency of this action, the Federal Circuit issued its opinion in Albemarle Corp. v. United States, 821 F.3d 1345 (2016). In that decision, the court held that normally Commerce should average the zero or de minimus rates of mandatory respondents in determining the rates of non-examined parties.

4 See Id. at 1354. In the light of Alb
See Id. at 1354. In the light of Albemarle, the court asked the parties to submit supplemental briefing on the decision’s impact on this proceeding. Heze argues that given the similarity between it and the plaintiff in Albemarle, the court should remand the issue to Commerce with instructions to use the “expected method” and apply the zero rate to Heze for the POR. Plaintiff’s Supplemental Brief Concerning the Impact of the Court of Appeal for the Federal Circuit’s Decision in Albemarle Heze Supp. Br.12. Clearon disagrees arguing that Albemarle is distinguishable and that if the action is remanded, then Commerce should be permitted to reopen the record to assess the proper rate against Heze. Clearon Supp. Br. at 4requests a remand to consider the impact of Albemarle. U.S. Supp. Br. at 5 This matter was assigned to this judge on September 4, 2018. Order of Reassignment, Doc. No. 78. At a conference on September 11, 2018, Heze agreed that there is no need to examine its other data if it receives a rate of zero based on the rate of the selected mandatory respondents. Conference Call, Doc. No. 80. Court No. 15-00027 Page 5 JURISDICTION AND STANDARD OF REVIEW The court has jurisdiction pursuant to 28 U.S.C. § 1581(c). The court will uphold Commerce’s final results in an antidumping review unless those results are “unsupported by substantial evidence on the record, or otherwise not in accordance with law[.]”1516a(b)(1)(B)(i). DISCUSSION In view of the intervening precedent of Albemarle, the resolution of this matter is made substantially easier. The Federal Circuit Court of Appeals found Commerce’s practice of disregarding zero or de minimus mandatory respondent rates when determining the rates of non- respondents to be inconsistent with the Uruguay R

6 S.C.C.A.N. 4040, 4201; see also 19 U.S.
S.C.C.A.N. 4040, 4201; see also 19 U.S.C. § 3512(d)(noting that the statement of administrative action Court No. 15-00027 Page 6 See Albemarle, 821 F.3d at 1354. Albemarle, however, made clear that under some circumstances deviation from this expected calculation method may be reasonable: when there is evidence that the dumping margins have not changed from period to period (and thus the assignment of a rate from a previous review might be appropriate) and when, in the adverse facts available context, “Commerce is allowed to consider deterrence as a factor.” Id. at 1357. In Albemarle, the Court found that neither circumstance was present in that case given evidence that the dumping margin had changed over time and that the non-selected party had fully cooperated with the review, and, in fact, had requested to be individually examined. Id. at 1357 Here, neither specified circumstance for deviation from the expected method occurred. First, there is clear evidence that the dumping margins have changed given the mandatory respondents were assigned a zero rate in this review, while they were assigned significant rates in the review immediately prior. See Final Results; Chlorinated Isocyanurates From the People's Republic of China: Final Results of Antidumping Duty Administrative Review; 2011-2012, 79 Fed. Reg. 4875 (Dep’t Commerce Jan. 30, 2014). Second, like the plaintiff in Albemarle, Heze request that Commerce individually exam it was denied. See Albemarle, 821 F.3d at 1349; Prelim I&D Memo at 2; Heze 56.2 Br. at 4 U.S. Resp. Br. at 45. Additionally, despite being rejected as both a mandatory and voluntary “shall be regarded as an authoritative expression by the United States concerning the interpretation and application of the Uruguay Round Agreements and this Act in any judicial proceeding in whic

7 h a question arises concerning such inte
h a question arises concerning such interpretation or In the 20112012 POR, Commerce assigned a 47.17% rate to Hebe Jiheng Chemical Co., Ltd. and a 59.12% rate to Juancheng Kangtai Chemical Co., Ltd. Chlorinated Isocyanurates from the People's Republic of China: Final Results of Antidumping Duty Administrative Review; 2011 79 Fed. Reg. 4875 (Dep’t of Commerce Jan. 30, 2014). Court No. 15-00027Page 7respondent, Heze still submitted documentation Commerce requested of the selected mandatory respondents, albeitarguablyafter the deadline. SeeHeze 56.2 Br. at 1314; U.S. Resp. Br. at 4. In view of Heze’s repeated attempts to cooperate with Commerce, deterrence is not a reasonable reason to deviate from the expected method of averaging the rates assigned to mandatory respondents.Given that the Federal Circuit left open that other circumstances may exist that could makedeviation from the expected method reasonable, the court asked the United Statesduring theconferenceofSeptember 11, 2018,whether there was any reasonfor Commerce to do anything other than apply the zero rateto Hezein this circumstance. The United States responded that no such reason existed. See 2018,Orderat 2. The courtconcludes there is no reason for further examination of any evidence andremands this action with instructions for Commerce to apply azerorate to Hezefor the For the foregoing reasons, the court remandsthis matterfor Commerce to apply the mandatory respondent’saveragedzero rate to Heze Huayi. Commerce shall fileits remand determination with the court on or before 21daysof the issuance of this opinion.As there is no new action possible that could require further briefing, the court does not setafurther schedule, but will enter judgment upon receipt of the conforming determination. __/s/Jane A. Restani Jane A. RestaniJudgeNew York, New York

IM 350:Â Intellectual Property Law and New Media. Spring, 2015. Here and functional. True. False. In . Kewanee Oil Co. v. . Bicron. Corp.. , the District Court, applying Ohio trade secrets law, granted a permanent injunction against the disclosure or use by the defendants of twenty of the forty claimed trade secrets. The Court of Appeals for the Sixth Circuit reversed the District Court on the ground that Ohioâ€™s trade secret laws were in conflict with the patent laws of the United States. The US Supreme .

[PUBLISH]IN THE UNITED STATES COURT OF APPEALSFOR THE ELEVENTH CIRCUIT