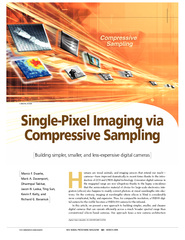 Download Pdf - The PPT/PDF document "IEEE SIGNAL PROCESSING LETTERS VOL" is the property of its rightful owner. Permission is granted to download and print the materials on this web site for personal, non-commercial use only, and to display it on your personal computer provided you do not modify the materials and that you retain all copyright notices contained in the materials. By downloading content from our website, you accept the terms of this agreement.

Page 1 IEEE SIGNAL PROCESSING LETTERS, VOL. 9, NO. 10, OCTOBER 2002 305 Spatial Correlation for General Distributions of Scatterers Paul D. Teal, Thushara D. Abhayapala , Member, IEEE , and Rodney A. Kennedy , Senior Member, IEEE Abstract The well-known results of the spatial correlation function for two-dimensional and three-dimensional diffuse fields of narrowband signals are generalized to the case of general distributions of scatterers. A method is presented that allows closed-form expressions for the correlation function to be obtained for arbitrary scattering distribution

functions. These closed-form expressions are derived for a variety of commonly used scattering distribution functions. Index Terms Scattering distribution, sensors, spatial correla- tion. I. I NTRODUCTION HERE IS GROWING interest in the literature in the use of multiple sensors—particularly, multiple antennas for transmission and/or reception of wireless signals. As well as diversity reception [1], this includes such areas as acoustic systems, fixed and mobile multiple-input multiple-output (MIMO) systems, spatio-temporal equalization, adaptive arrays, and space-time coding. Most of the work

assumes that each receiving sensor receives uncorrelated signals and, con- versely, that the signal received from each transmitting source is uncorrelated. A widely used “rule” is that half a wavelength separation is required in order to obtain decorrelation. This arises from the first null of the function, which is the spatial correlation function for a three-dimensional (3-D) diffuse field [2]. Several approaches have been used in the case of signals con- fined to a limited azimuth and/or elevation [3]. In this letter, a modal analysis approach is presented that can be used to obtain

closed-form expressions for the spatial correlation function for narrowband signals for a wide variety of scattering distribution functions. II. S PATIAL ORRELATION ORMULATION Consider two sensors located at points and . Let and denote the complex envelope of the received signals at two sensors, respectively. Then, the normalized spatial cor- Manuscript received December 4, 2001; revised July 10, 2002. The associate editor coordinating the review of this manuscript and approving it for publica- tion was Prof. Victor A. N. Barroso. P. D. Teal is with the Communications Team, Industrial Research

scattering environ- ment with the scatterers distributed sufficiently far from the two sensors. If the transmitted signal is a narrowband signal (where is the angular frequency, , and is the time), then the received signal at the th receiver is (2) where is the speed of wave propagation; is a unit vector pointing in the direction of wave propagation; and is the complex gain of scatterers as a function of direction that cap- tures both the amplitude and phase distribution. Also note that the integration in (2) is over , the unit sphere in the case of a 3-D multipath environment or the unit

circle in the two-dimen- sional (2-D) case. We substitute (2) in (1), and we assume that scattering from one direction is independent from another direc- tion to get (3) where is the wave number, and (4) is the normalized average power of a signal received from direc- tion , or the distribution function of scatterers over all angles. III. T HREE -D IMENSIONAL CATTERING NVIRONMENT To gain a better understanding of spatial correlation, we now use a spherical harmonic expansion of plane waves, which is given [4] as (5) where are spherical Bessel functions, and (6) 1070-9908/02$17.00 © 2002 IEEE

Page 2 306 IEEE SIGNAL PROCESSING LETTERS, VOL. 9, NO. 10, OCTOBER 2002 where and are the elevation and azimuth, respectively, of the unit vector and where are the associated Legendre functions of the first kind. Equations (3) and (5) may be com- bined to obtain (7) where (8) The fact that the higher order spherical Bessel functions (and in Section IV the higher order Bessel functions) have small values for arguments near zero means that to evaluate the correlation for points near each other in space, only a few terms in the sum need to be evaluated in order to obtain a very good

approxima- tion [5]. A. Three-Dimensional Omnidirectional Diffuse Field If waves are incident on the two points from all directions in 3-D space, then (7) reduces to a single term, and so the correla- tion coefficient is given by where for , and . This is the classical result [2]. The first zero crossing is at B. Uniform Limited Azimuth/Elevation Field Without loss of generality, the coordinate system may be chosen so that and , i.e., . If the scatters are uniformly distributed over the sector , then the correlation can be expressed as (9) Note that (9) is actually expressible in closed form

(the integrals can be evaluated, for example, by using recursions in and ). Hence, this result can be used to build up the result for a gen- eral scattering situation. An arbitrary scattering can be regarded as the limiting summation of a weighted set of uniformly dis- tributed incremental solid-angle contributions. Fig. 1 shows the case where energy is arriving from all az- imuth directions (uniformly) but the elevation spread is in some Fig. 1. Spatial correlation versus separation for different elevation ranges. This figure shows that the spread of interference in elevation plays only a

secondary role in influencing spatial correlation and, hence, diversity. range of angles on both sides of zero elevation. The spatial cor- relation is shown for four sets of elevation spread, each centered on . It is clear that given an azimuthal distribution, spa- tial correlation in the horizontal plane is relatively insensitive to the elevational distribution. Multipath that has some small elevation spread (in many practical situations, we would not ex- pect much) may be modeled as only coming from the horizontal plane. C. Spherical Harmonic Model Given that the distribution function is

useful to consider the 2-D modal expansion [4] (11) where and are the angles of and . Equations (3) and (11) may be combined to obtain (12) Page 3 TEAL et al. : SPATIAL CORRELATION FOR GENERAL DISTRIBUTIONS OF SCATTERERS 307 where (13) with the distribution function equivalent to in (4), and where is the angle of the vector connecting and Without loss of generality, can be considered to be zero. A. Two-Dimensional Omnidirectional Diffuse Field For the special case of scattering over all angles in the plane containing two points, (12) reduces to a single term, and so the correlation

coefficient is given by , another classical result [1]. As can be seen by an examination of Fig. 1, and are qualitatively similar. B. Uniform Limited Azimuth Field In the case of energy arriving uniformly from a restricted range of azimuth ( ,wehave (14) This result is equivalent to that derived in [6]. C. Distributed Field Another azimuthal distribution used for calculation of corre- lation is [7] (15) where is a normalization constant and . Using [8, (335.19)], we have (16) D. von-Mises Distributed Field Nonisotropic scattering in the azimuthal plane may be mod- eled by the von-Mises

distribution (e.g., [9]), for which the den- sity is given by (17) where represents the mean direction; represents the degree of nonisotropy, and is the modified Bessel func- tion of the first kind. In this case, using [10, (3.937)] we have (18) For the von-Mises distribution, the correlation can be calculated without the need for a summation [9]. There are situations, how- ever, as reported in [11] where other models of the scattering distribution are more appropriate than von-Mises. Fig. 2. Correlation for angle of incidence 60 from broadside against separation of sensors with angular spread

the datasets in Fig. 2 is defined as the square root of the variance, which for this distribution is given by (21) Approximately 100 terms of the summation (12) were re- quired to obtain results to about ten significant digits at the largest spatial separation of 5 , or 70 terms for five significant digits. For separations up to 2 only 40–50 terms are required. Evaluation of the spatial correlation to the same accuracy via adaptive numerical quadrature requires between 100 and 500 function evaluations. The summation in (12) is over terms that are the product of three components, dependent on

the center angle , the spatial separation , and the nonisotropy parameter (such as ,or ) respectively, so that if any of these parameters are constant, as they are in many situations, then the components need not be recalculated. Fig. 2, for in- stance, takes approximately 175 times more CPU time to draw using quadrature than using the modal technique. Page 4 308 IEEE SIGNAL PROCESSING LETTERS, VOL. 9, NO. 10, OCTOBER 2002 F. Gaussian Distributed Field Several researchers [3], [7] have used the Gaussian distribu- tion for modeling the distribution of scatterers, thus (22) where is

the standard deviation, and is a normalization con- stant. It can be shown using [13, (313.6)] and the symmetries of the error function for complex arguments discussed in [14] that Re erf erf (23) It can be seen that contrary to the assertion of [11], a closed-form solution for the correlation function is available for distribution functions other than the Gaussian (such as the distribu- tion), and that the Gaussian case is neither a simple nor natural choice. If, however, the beam is narrow, a good approximation for the Gaussian case can be obtained by performing integra- tion over the domain

between the sensors. For a given spacing, mutual cou- pling of terminated antennas can actually decrease the corre- lation between the sensors from that calculated using the ex- pressions above. One interpretation of this is that the presence of other antennas creates a slow-wave structure that, in effect, decreases the wavelength of the signal in their vicinity and, thus, increases the number of wavelengths separation between the elements. This phenomenon was first reported in [15] and has recently been reported in [16]. If it proves true, in gen- eral, that mutual coupling effects decrease

correlation, then the closed-form expressions of the previous sections may be con- sidered as upper bounds on the correlation between antennas in an electromagnetic field. VI. C ONCLUSION Closed-form solutions have been presented for the correlation between the signal at physically separated points in a field with the signal power distributed in solid or planar angle following a variety of commonly used distribution functions. Unlike some other approaches, the method can be applied to many distribu- tion functions, and for small spatial separations, accurate results are obtained with very few

terms. Application of the method reveals that restriction of the signal elevation does not have a large impact on the signal correlation coefficient, provided there is omnidirectionality in one plane containing the two points. Restriction of the signal in both planes considerably increases signal correlation. In order to exploit diversity for sensors spaced or closer, there must be omnidirectionality in at least one plane. To obtain uncorrelated signals with directional sensors, the spacing must be considerably larger. EFERENCES [1] W. C. Jakes, Ed., Microwave Mobile Communications . New York: