Chapter 5 History of the Fertile Crescent The Main Idea The rivers of Southwest Asia supported the growth of civilization New farming techniques led to the growth of cities The BIG Idea The valleys of the Tigris and Euphrates rivers were the site of the worlds first civilizations ID: 540296 Download Presentation

Download Presentation - The PPT/PDF document "Pages 114-139" is the property of its rightful owner. Permission is granted to download and print the materials on this web site for personal, non-commercial use only, and to display it on your personal computer provided you do not modify the materials and that you retain all copyright notices contained in the materials. By downloading content from our website, you accept the terms of this agreement.

History of the Fertile CrescentSlide2

The rivers of Southwest Asia supported the growth of civilization

New farming techniques led to the growth of cities

The valleys of the Tigris and Euphrates rivers were the site of the world’s first civilizations.Slide4Slide5

The Land Between the Rivers

igris and Euphrates rivers are the most important physical features of the region sometimes known as Mesopotamia.

Mesopotamia means “between the rivers” in Greek.

The region is part of the

, a large arc of rich, or fertile, farmland.Slide6Slide7Slide8

The Rise of Civilization

Hunter-gatherer groups first settled in Mesopotamia more than 12,000 years ago.

Every year, floods on the Tigris and Euphrates rivers brought

, a mixture of rich soil and tiny rocks, to the land.

The fertile silt made the land ideal for farming.

Eventually, these early villages developed into the world’s first civilizations.Slide9Slide10

Farming in Mesopotamia was

Farmers knew that they needed to develop a way to control the rivers’ flow.Slide11

, a way of supplying water to an area of land, to solve their flooding/drought problems.

, human-made waterways, that connect these basins to network of ditches.

Farmers built up the rivers’ banks or

to help protect their farm fields.Slide12Slide13

Irrigation increased the amount of food that could be grown.

, or more than they needed.

Having people available to work on different jobs meant that society could accomplish more.

Large projects could be accomplished with the specialized workers.

These could be provided by laws and government.Slide16

Over time, Mesopotamian settlements grew both in size and complexity.

They gradually developed into cities between 4000 and 3000 BC.

The cities were still based on agriculture.Slide17

What does Mesopotamia mean?

On what rivers did Mesopotamia develop?

What is the Fertile Crescent?

When and how were farming settlements established in Mesopotamia?

How did the Fertile Crescent get its name?

What was the most important factors in making Mesopotamia’s farmland fertile?

Why did farmers need to develop a system to control their water supply?

In what ways did a division of labor contribute to the growth of the Mesopotamian civilization?

How did irrigation help farmers?

What effects did irrigation have on farming settlements?

How might big construction projects like the building of canals and large buildings lead to laws and government? 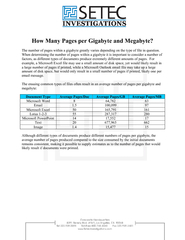 How Many Pages per Gigabyte and Megabyte? PowerPoint Presentation
217 views
Show more