Download Presentation - The PPT/PDF document "In the name of Allah the Most Gracious t..." is the property of its rightful owner. Permission is granted to download and print the materials on this web site for personal, non-commercial use only, and to display it on your personal computer provided you do not modify the materials and that you retain all copyright notices contained in the materials. By downloading content from our website, you accept the terms of this agreement.

In the name of Allah the Most Gracious the Most Merciful

Ranked Sixth in the World

The Second Meeting on the Public Employment Services

Presentation on behalf of Bureau of Emigration & Overseas Employment under the Ministry of Overseas Pakistanis and Human Resource Development, Government of Pakistan

nd largest in the OIC Member States, having a population of 195.4 million.

Pakistan has the potential of manpower with 61.04 million labour force. Out of which 57.42 million are employed and 3.62 million are unemployed

Per capita income of Pakistan is US$ 1560.7.Pakistan is one of the leading manpower supplier in the OIC member States being pro-emigration country.

COMPONENTS OF ECONOMY OF PAKISTAN

Launching of Mega Projects in Energy and Communications sector

Provision of Laptops to talented students (Provided to brilliant students free of cost).

Export of manpower through Bureau of Emigration & Overseas Employment.

Since 1971, more than 9.4 million Pakistani emigrants have proceeded abroad for employment.

During the year 2015, highest number of Pakistanis(946,571) proceeded abroad for the purpose of employment.

During the year 2016 (January – August), 640,145 Pakistanis proceeded abroad for the purpose of employment.

The Emigration Rules, 1979 (framed under the above Ordinance) Procedure devised according to the Emigration Laws to deal with day-to-day matters pertaining to the emigration process

To control and regulate emigration.

To look after and safeguard the interest of the emigrants.

To facilitate, supervise and monitor the activities of Overseas Employment Promoters (OEPs).

To advise the Federal Government on Emigration Policies

Processing of all manpower demands as per Emigration Laws.

Protection of the terms and conditions of employment of migrants.

Aid and advise the departing and returning migrants.

Inspection of the conveyance carrying the departing & returning migrants

FUNCTIONS OF PROTECTOR OF EMIGRANTS

UNDER BUREAU OF EMIGRATION & OVERSEAS EMPLOYMENT

Community Welfare Attaches have been posted abroad in Pakistani Missions by the Government of Pakistan mostly in GCC States for the purpose of:

Safeguarding the interest of Pakistani migrants in the host country, settlement of their disputes and complaints with the respective employers.

Assessment and analyses of labour market and submission of periodical reports on labour market trends, inflation and cost of living to the Ministry of Overseas Pakistanis & Human Resource Development.

Generation of demand by the host country

Attestation of demand by the Embassy (CWA)

by the Protector of Emigrants to the concerned Overseas Employment

Promoter (OEP)Advertisement in the National News papers by the OEPs.Selection from Data Bank maintained by Overseas Employment Promoters.

Trade test/interview by foreign employer himself or his authorized representative to select right person for the right job.

Medical examination from Medical Centers approved by the host country.

Registration of intending emigrants with the Protector of Emigrants

Execution of Foreign Service Agreement (FSA) / Contract between emigrant and the employer or the Overseas Employment Promoter on behalf of the employer.

FSA with Protector of Emigrants is mandatory.

Personal appearance of the workers before Protector of Emigrants prior to departure abroad is mandatory. FOREIGN SERVICE AGREEMENT

Briefing regarding terms and conditions of service by the Overseas Employment Promoters.

the Protectorates of Emigrants on

the climate, social, customs, traditions and labour laws of the host

Overseas Employment Promoter who indulges in mal-practices and illegal activities is dealt with as under:

License is suspended for a specified period.

Security is forfeited in whole or part.

Special Courts to try the offences.

Imprisonment which may extend to 14 years.

DETAILS OF RECRUITMENT OFFICES ARE AS FOLLOWS:

).The data bank of the job seekers is being maintained by 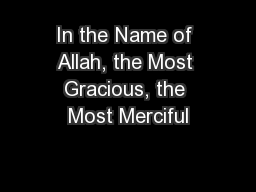 In the Name of Allah, the Most Gracious, the Most Merciful PowerPoint Presentation In the Name of Allah The All Merciful, The Most Merciful. 1. O you who PowerPoint Presentation