DownloadNote - The PPT/PDF document "Today’s Prompt" is the property of its rightful owner. Permission is granted to download and print the materials on this web site for personal, non-commercial use only, and to display it on your personal computer provided you do not modify the materials and that you retain all copyright notices contained in the materials. By downloading content from our website, you accept the terms of this agreement.

Robert Hayden, born Asa Bundy Sheffey in Detroit, Michigan, was raised in a slum called Paradise Valley. Hayden's parents separated soon after his birth and he became the foster child of Sue Ellen Westerfield and William Hayden. He earned his BA (1936) from Detroit City College, later renamed Wayne State University, and between 1936 and 1938 participated in the Detroit Federal Writer's Project. His studies with W.H. Auden at the University of Michigan, where he earned his MA (1944), had a profound impact on his poetry. After graduation he accepted a professorship at Fisk University in Nashville where he would remain for over twenty years. In 1969 he returned to teach at Michigan until his death. Hayden's early reading of Harlem Renaissance poets such as Countee Cullen and Langston Hughes, combined with his study of the English classics, informed the precision and originality of his poetry throughout his life. As William Meredith states: "Robert Hayden was a man as gifted in humanity as he was in poetry. There is scarcely a line of his which is not identifiable as an experience of black America, but he would not relinquish the title of American writer for any narrower identity." Whether exploring an extended metaphor as in "The Diver" or drawing on the biography of Phyllis Wheatley, Hayden's poetry remains a distinct contribution to our literature.

too my father got up early

and put his clothes on in the

then with cracked hands that ached

from labor in the weekday weather made

banked fires blaze. No one ever thanked him.

I'd wake and hear the cold splintering, breaking.

When the rooms were warm, he'd call,

and slowly I would rise and dress,

fearing the chronic angers of that house,

Speaking indifferently to him,

who had driven out the cold

and polished my good shoes as well.

of love's austere and lonely offices?

a poem about one of your parents or grandparents. Think about the work they do every day, and describe one of their seemingly simple routines—doing laundry, for example. Like Hayden, try to use as many sense images as you can: how does their task sound to you? When do they do it?

“Those Winter Sundays” alternates between very concrete images, like “cracked hands that ached from labor,” and more abstract ones, like “the chronic angers of that house.” Think about the effect of the two kinds of images—what do you picture when you read the final line of the poem, for example? Try writing a poem that uses both concrete and abstract images to describe an event you remember, either from the distant or more recent past. Responding to the Prose Prompt

Responding to the Prose Prompt PROMPT: Use the chart to answer this question:

PROMPT: Use the chart to answer this question: 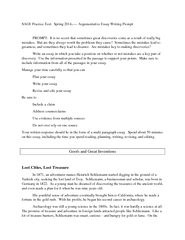