Download Pdf - The PPT/PDF document "Ofce of Transportation and Air Quality E..." is the property of its rightful owner. Permission is granted to download and print the materials on this web site for personal, non-commercial use only, and to display it on your personal computer provided you do not modify the materials and that you retain all copyright notices contained in the materials. By downloading content from our website, you accept the terms of this agreement.

The agencies are issuing a Supplemental Notice of Intent outlining the key program elements of a National Program that EPA and NHTSA plan to propose for model year (MY) 2017-2025 light-duty vehicles. The agencies have continued to coordinate extensively with California, and have held extensive discussions with stakeholders, including automakers, states, environmental groups, and others, to ensure our pro posal is based on the most robust technical analysis possible. Many automakers and California have announced their commitment to support the National Program. This approach, if ultimately

adopted, will allow manufacturers to build a single light-duty national eet that would satisfy all requirements under both programs, and would provide signicant reductions in GHGs and oil consumption. The standards under consideration are projected to reduce GHGs by approximately 2 billion metric tons and save 4 billion barrels of oil over the lifetime of MY 2017-2025 vehicles. These standards have signicant benets to American consumers by reducing the costs they would pay to fuel these more efcient vehicles. The letters of commitment from these

organizations can be found at www.epa.gov/otaq/climate/regulations.htm Page 2 Key Elements of Future Proposed Standards EPA and NHTSA intend to propose two separate but coordinated sets of standards for model years 2017 through 2025, each under their respective statutory authorities. Both the proposed CO and CAFE standards would be based on a vehicle’s “footprint,” or size, similar to the stan dards currently in effect through model year 2016, and would become more stringent each model year from 2017 through 2025. EPA intends to propose standards that would be projected to achieve,

on an average industry eet wide basis, 163 grams/mile of CO in model year 2025 (this would be equivalent, on a mpg-equivalent basis, to 54.5 mpg if all of the CO emissions reductions were achieved with fuel economy technology). For passenger cars, the CO compliance values associated with the footprint curves would be reduced by 5 percent each year from the CO -footprint curves for the model year 2016 passenger car standard. In recognition that full-size pick-up trucks have unique challenges compared to other light-duty trucks and passenger cars, EPA intends to propose a lower annual

rate of improvement for light-duty trucks in the early years of the program. For light-duty trucks, the proposed overall annual rate of CO emissions reduction in model years 2017 through 2021 would be 3.5 percent per year. For model years 2022 through 2025, EPA expects to propose an overall annual rate of CO emissions reduction for light-duty trucks of 5 percent per year. Given the long time frame at issue in setting standards for MY2022-2025 light-duty vehicles, EPA and NHTSA intend to propose a comprehensive mid-term evaluation. Consistent with the agencies’ commitment to maintaining a

single national framework for vehicle GHG and fuel economy regulation, the agencies will conduct the mid-term evaluation in close coordination with California. In achieving the level of standards described above for the 2017-2025 program, the agencies expect automakers’ use of advanced technologies to be an important element of transforming the vehicle eet. The agencies are considering a number of incentive programs to encourage early adoption and introduction into the marketplace of advanced technologies that represent “game changing” performance improvements, including: r Incentives

for electric vehicles, plug-in hybrid electric vehicles, and fuel cells vehicles r Incentives for advanced technology packages for large pickups, such as hybridization and other performance-based strategies r Credits for technologies with potential to achieve real-world CO reductions and fuel economy improvements that are not captured by the standards test procedures. Real-world CO is typically 25 percent higher and real-world fuel economy is typically 20 percent lower than the CO and CAFE values discussed here. For an mpg value that consumers can compare to their own vehicle’s label

PSJRUUHDOZRUOGIXHOHFRQRP\(3$HVWLPDWHVWKDWWKHVWDQGDUGVXQGHUFRQVLGHUDWLRQZRXOG\LHOGDHHWZLWKDQ approximate real world fuel economy of about 39 mpg by model year 2025. Page 3 In addition, EPA plans to propose provisions for: r Credits for improvements in air conditioning (A/C) systems, both for efciency improve- ments and for use of alternative, lower global warming potential refrigerant r Treatment of compressed natural

gas (CNG) and plug-in hybrid electric vehicles r Continued credit banking and trading, including a one-time carry-forward of unused MY 2010-2016 credits through MY 2021 Background Following the successful adoption of a National Program for GHG and fuel economy standards for model years (MY) 2012-2016 vehicles, President Obama requested the agencies to continue their efforts to address standards for MY 2017-2025. In a May 21, 2010, Presidential Memo randum, the President requested that EPA and NHTSA work together to develop a national program that would The President recognized our country

could take a leadership role in addressing the global challenges of improving energy security and reducing greenhouse gas pollution, stating that Since that time, the agencies have worked with the state of California to address all elements requested in the May 21, 2010 Presidential Memorandum. We completed an initial assess ment of the technologies, strategies and underlying analyses that would be considered in setting standards for 2017-2025, in consultation with a wide range of stakeholders. The Interim Techni cal Assessment Report (TAR) and a Notice of Intent to (NOI) to conduct a joint

rulemaking were concluded on September 30, 2010. Following the opportunity for public comment on the interim TAR and NOI, the agencies developed and published a Supplemental NOI (SNOI) in December 2010 highlighting many of the key comments received in response to the September NOI and the TAR. That notice also discussed the agencies’ plans for many of the key technical analyses that would be undertaken in developing the upcoming proposed rulemaking. The National Program would apply to passenger cars, light trucks, and medium-duty passenger vehicles built in model years 2017-2025. Together,

these vehicle categories, which include passenger cars, sport utility vehicles, minivans, and pickup trucks, are responsible for approxi mately 60 percent of all U.S. transportation-related fuel consumption and greenhouse gas emissions. The Presidential Memorandum is found at: ZZZZKLWHKRXVHJRYWKHSUHVVRIFHSUHVLGHQWLDOPHPRUDQGXPUHJDUGLQJIXHOHIFLHQF\VWDQGDUGV 75 FR 62739, October 13, 2010. 75 FR 76337, December 8, 2010. Page 4 Next Steps EPA and NHTSA are developing a joint proposed

rulemaking, which will include full details on the proposed program and supporting analyses, including the costs and benets of the proposal and its effects on the economy, auto manufacturers, and consumers. After the proposed rules are published in the Federal Register, there will be an opportunity for public comment and public hearings. The agencies plan to issue a Notice of Proposed Rulemaking by the end of September 2011. California plans on adopting its proposed rule in the same time frame. For More Information You can access the EPA and DOT “Supplemental Notice of Intent:

Ofce of Transportation and Air Quality EPAF August How to M 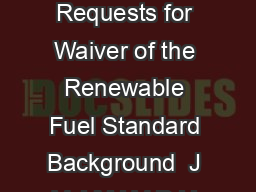