What is banned books week and why do we celebrate it? - PowerPoint Presentation What is banned books week and why do we celebrate it? - Description

Embed / Share - What is banned books week and why do we celebrate it?

Presentation on theme: "What is banned books week and why do we celebrate it?"— Presentation transcript

What is banned books week and why do we celebrate it?

Why are books banned and challenged?

What books have been banned and challenged?

What prevents people from banning any book they think is objectionable?Slide3

Why are books banned and challenged?

To protect the children, of course!!!

The Dangers of Reading

Most of the time the push to ban a book comes from concerned parents who do not what their child exposed the ideas or themes presented in a specific book.

1,607 due to “sexually explicit” material

1,256 because of material deemed inappropriate for the age group

842 for material dealing with the occult

419 for “promoting a religious viewpoint”

People For the American Way

But, isn’t that a good thing?

Isn’t it a parent’s duty to protect their child from the harsh reality of the world? And aren’t these good reasons to keep these books out of the hands of innocent children? Slide8

On the surface it seems like a perfectly logical and moral step to keep children from being exposed to things you might not agree with. However, the issue is a lot more complicated than it seems on the surface. Just look at some of the books that have been banned and challenged throughout history.Slide9

What books have been banned or challenged?Slide10

And Tango Makes Three by Peter Parnell and Justin Richardson

This is a children’s picture book about two actual male penguins in an actual zoo who came together to raise a baby penguin, and it’s one of the most challenged and banned books of recent times.

Taken from: “Children’s Book Challenges: An NYPL Panel on Censorship”Slide12

was fired for assigning books with gay characters to her English class.

said she was only trying to teach her students inclusion. She said, “It’s important to give equal opportunity to all kids, so they see themselves reflected in the curriculum.” The school board did not agree.

From the article: The Case of the Disappearing Books, Olson.Slide13

The Absolutely True Diary of a Part-Time Indian

has been banned and challenged many times in many places since its publication because of its inclusion of poverty, alcoholism, violence, homosexuality, sexual references, profanity, and death.

The problem with this is that it is a true story, and one many young adults are living today. Slide14

A Word from the Author:

speaks out about this kind of censorship saying “I write books for teenagers because I vividly remember what it felt like to be a teen facing everyday and epic dangers. I don’t write to protect them. It’s far too late for that. I write to give them weapons – in the form of words and ideas – that will help them fight their monsters. I write in blood because I remember what it felt like to bleed.”

on Why the Best Kids Books

It might be easier to ask which books haven’t been.

So, we also must ask:

Why is intellectual freedom so important?

“The removal of one book is the equivalent of stripping away the rights of thousands to choose books for themselves.” –ALA President Molly Raphael

In 1976 when there was a lot of attention on the Island Trees School District in New York for banning several books parents found objectionable one librarian there commented,

“The fact that a book is on the school shelves need not mean that all librarians or teachers join in agreement on its values. Under such a test, atheists might ban the Bible.”

Taken from: “Speaking Out on Book Banning”Slide17

In that same article the librarian being interviewed talked about a different time when books were on trial. She said that some of the parents who opposed the banning of books in the Island Trees District remember, “living through

the horror of persecution and censorship of their books and newspapers during the times of Hitler and Stalin.

Taken from: “Speaking Out on Book Banning”Slide18

Heine’s books were burned by the Nazis.

Guess what else they burned.Slide19

Censorship is about the restriction and control of intellectual development…

” This is exactly why the Nazi’s burned books, and if we aren’t careful it could easily be any other country or group of people. Reading is dangerous! Especially for those who would rule the ignorant masses. Boyd & Bailey say

Why is intellectual freedom important?Slide21

It is true that the majority of challenges to books come from concerned (if misguided) parents, but we must be ever vigilant of bigger and darker threats. We celebrate banned books week as a reminder of a freedom we often take for granted.Slide22

Congress shall make no law respecting an establishment of religion, or prohibiting the free exercise thereof; or abridging the freedom of speech, or of the press; or the right of the people peaceably to assemble, and to petition the government for a redress of grievances.Slide23

Taken from YouTube and originally posted by Banned Books WeekSlide24

Authors, Librarians, Teachers, Students, and anyone who understands what is truly at

on Why the Best Kids Books are Written in Blood.

on the Web. Retrieved from http://

/childrens-industry-news/article/61022-children-s-book-challenges-an-nypl-panel-on-censorship.html.McDonald, Allison (2013). 13 Banned and Challenged Books for Kids. No Time for Flashcards. Retrieved from http://

People For the American Way

Download Presentation - The PPT/PDF document "What is banned books week and why do we ..." is the property of its rightful owner. Permission is granted to download and print the materials on this web site for personal, non-commercial use only, and to display it on your personal computer provided you do not modify the materials and that you retain all copyright notices contained in the materials. By downloading content from our website, you accept the terms of this agreement. 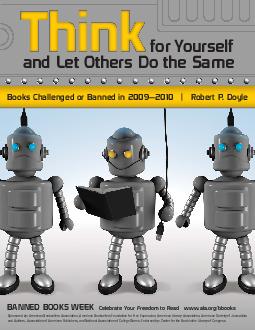 Banned Books in the PowerPoint Presentation