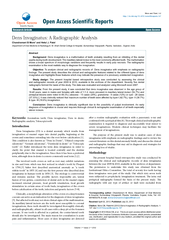 
Download Pdf - The PPT/PDF document "MoreandPatel httpdxdoiorg scientificrepo..." is the property of its rightful owner. Permission is granted to download and print the materials on this web site for personal, non-commercial use only, and to display it on your personal computer provided you do not modify the materials and that you retain all copyright notices contained in the materials. By downloading content from our website, you accept the terms of this agreement.

57374is condition is also known as Dens in Dente Dilated composite odontome Gestant odontoma Dentinoid in dente or Telescopic tooth 2 Hallet introduced the term dens invaginatus in order to clarify the point that enamel is located centrally and the ID: 75712 Download Pdf

[2] Hallet introduced the term dens invaginatus in order to clarify the point that enamel is located centrally and the dentine peripherally due to the invagination. Since then it has been a preferred term, although dens in dente is a more commonly used term [1,2] . e involved tooth crown as well as root may exhibit variations in size and form which was rst noticed in whale’s tooth by Ploquet in 1794.[3] Salter rst described anatomical anomaly as “a tooth within tooth” in 1855 [4] and was the rst person who described dens invaginatus in human tooth in 1856 [3].

e etiology is controversial and remains unclear. e possible factors responsible are, lateral fusion of two germs, constriction of dental arch in the enamel organ, increased external pressure, focal growth retardation, focal growth stimulation in certain areas of tooth buds, invagination of the crown before calcication of the teeth, infection and genetic factors [5-8]. Clinically, a morphologic alteration of the crown or a deep foramen coecum can serve as an indication for the diagnosis of dens invaginatus [5]. But aected tooth may not show clinical signs of the

malformation. As maxillary lateral incisors are the teeth most susceptible to coronal invaginations, these teeth should be investigated thoroughly clinically and radiographically, atleast in all cases with a deep pit at the foramen coecum. If one tooth is aected in a patient, the contra-lateral tooth should also be investigated. e main reason for consultation is acute pain and inammation. Most cases of dens invaginatus are detected aer a routine radiographic evaluation with a panoramic x-ray and conrmed with a periapical lm [6]. orough

clinical and radiographic examination is required to diagnose and successfully treat minor to severe invaginations. Modern clinical techniques may facilitate the management of invaginations. e purpose of the present study was to analyse cases of dens invaginatus with emphasis on radiographic ndings and to review the current literature on this dental anomaly briey and discuss the clinical and radiographic ndings that may aid in diagnosis and strategies for preventing loss of vitality. Methodology e present hospital based retrospective study was conducted

by assessing the clinical and radiographic records of dens invaginatus between the year 2009 & 2010, available in the archives of department. e permission to undertake this study was obtained from the Institutional Ethics Committee. e total of seventy ve teeth having dens invaginatus were part of the study. Out which sixty seven teeth were subjected to prophylactic invagination treatment. e intra oral periapical radiographs formed the basis of the present study. e radiographs with any type of artifact or fault were excluded from

included age, gender, aected tooth, any associated lesion and type of invagination. Results In the present study we observed that, the patient’s aected with dens invaginatus belonged to the age group of 16-40 years with the mean age of 28 years (Graph 1). e male to female ratio was 1:1.2 (Graph 2). All the aected teeth were from permanent dentition. Out of total seventy ve teeth, maxillary teeth (88%) were most aected as compared to the mandibular teeth (12%). It was also observed that, the most common tooth aected by dens invaginatus is

Discussion Dens Invaginatus (DI) occur rarely in primary but frequently in permanent dentition and has a general prevalence of 0.04–10%. In our study all the seventy ve teeth belonged to permanent dentition. Literature study shows that, DI is commonly seen in maxillary teeth and involvement in mandibular teeth is rare [9]. is observation is consistent with the ndings of the present study. We noted that 88% of the cases had maxillary teeth involvement. Maxillary lateral incisors are the teeth most susceptible to coronal 30 25 20 15 10 5 0 12 26 22 10 16-20 21-25 26-30

e gender predilection for DI i.e. male to female ratio is 1:1.7, with a slight female predilection [11]. Our study co-related this nding, wherein we observed that the male to female ratio was 1:1.2, with female predilection. Dens invaginatus is clinically signicant due to the possibility of the pulp being aected. As pulpal involvement of teeth with coronal invaginations may occur shortly aer tooth eruption, an early diagnosis is mandatory to instigate preventive treatment. Clinical examination may reveal a deep ssure or pit on the surface of an

anterior tooth. Due to the tortuous lingual anatomy, it is possible for caries to develop inside the invagination without any clinically detectable lesion. Since the enamel lining is thin and in close proximity to the pulp chamber, a carious lesion could easily perforate the pulp chamber. Further, there are sometimes thin canals within the enamel of the dens invaginatus, forming a direct communication with the pulp. Hence pulpitis and necrotic pulps are oen associated with this anomaly. e other reported sequelae of undiagnosed and untreated coronal invaginations are retention

of neighboring teeth, displacement of teeth, cysts and internal resorption. In the present study we observed that, out of seventy ve cases, 52 cases (69.33%) had periapical lesions either abscesses - 15 cases (20%), granuloma - 9 cases (12%) or cyst - 28 cases (37.33%) Dens invaginatus is oen a surreptitious nding. Upon radiographic evidence of a dens invaginatus, the apical periodontium should be examined. If the radiographic appearance is unremarkable, pulp sensitivity testing should be performed. If the results suggest vital and unaected pulpal tissue, then

the tooth should be promptly restored to curtail access of the dens invaginatus to the oral environment [5] (Figure 1). e Ohlers’s system is the most popularly used classication for DI. According to this system, invaginations are classied into the following three types based on the depth of the invagination and the degree of communication with the periodontal ligament or the peri-radicular tissue [3,12] Type I: e invagination ends in a blind sac, limited to the dental crown. Type II: e invagination extends to the cemento–enamel junction , also ending in

a blind sac. Type III: e invagination extends to the interior of the root, providing an opening to the periodontium, sometimes presenting another foramen in the apical region of the tooth [13]. In this study, we distinctly observed that type I pattern was seen in 32 cases (42.7%), type II in 29 cases (38.7%) & type III in 14 cases (18.6%). Dens invaginatus are known to be associated with other abnormalities such as taurodontism, microdontia, talon cusp (Figure 2), gemination, supernumerary tooth, dentinogenesis imperfecta, short roots and with some medical–dental syndromes[12,14,15].

H. M. Worth has described two types of dens in dente: rst is a root dilation resembling an open umbrella and other one is eur-de-lys which resembles the French emblem [16]. e treatment of dens invaginatus ranges from preventive and restorative treatment procedures to non- surgical root canal or surgical treatment. Conclusion Dens invaginatus is clinically signicant due to the possibility of pulpal involvement, pulpitis, necrotic pulps and chronic periapical lesions. An early diagnosis is crucial and requires thorough clinical Page 4

VFLHQWLFUHSRUWV Pageof Volume Issue examination of all teeth especially lateral incisors. ese invaginations act as niche for bacterial growth and may jeopardize the status of main canal. An early detection and sealing of its opening with acid etch resin can eectively prevent these complications. e ndings stress the importance of a follow-up program for teeth in order to avoid serious peri-radicular complications that could inuence the outcome of the

endodontic treatment. Because dens invaginatus is diagnosed as an incidental radiographic nding, radiographic examination is a valuable way of diagnosis in conjunction with clinical examination according to the ALARA principles. +OVPDQQ0'HQVLQYDJLQDWXVDHWLRORJ\FODVVLFDWLRQSUHYDOHQFH