What is graffiti?. Is this art?. What is the difference between a mural and a tag?. Is graffiti illegal if the artist gets paid?. Is public art important? Why?. How does public art make you feel?. So, why make it public???. ID: 541095

DownloadNote - The PPT/PDF document "Graffiti." is the property of its rightful owner. Permission is granted to download and print the materials on this web site for personal, non-commercial use only, and to display it on your personal computer provided you do not modify the materials and that you retain all copyright notices contained in the materials. By downloading content from our website, you accept the terms of this agreement.

What is the difference between a mural and a tag?

Is graffiti illegal if the artist gets paid?

Is public art important? Why?

How does public art make you feel?

free. There are no tickets. People don’t have to dress up. You can view it alone or in groups. It’s open to everyone

community and sense of place

Where did the word GRAFFITI come from?

Graffiti and graffito are from the Italian word

"Graffiti" is applied in

to works of art produced by scratching a design into a surface.

A related term is "

which involves scratching through one layer of pigment to reveal another beneath it. This technique was primarily used by potters who would glaze their wares and then scratch a design into it.

In ancient times graffiti was carved on walls with a sharp object, although sometimes

Since before the Italians had the word “Graffiti,” people have been leaving their marks on walls. These people weren’t viewed as criminals, nor were they likely seen as artists, but they could be hailed as forebears of modern journalism.

As a matter of fact, without ancient graffiti we wouldn’t have…

the world's oldest example of written Latin, carved into the lapis niger in the Forum in 575 B.C. We wouldn't have nearly as much idea of how literate most ancient Romans were, or of how they actually pronounced their language (both of which we can tell from graffiti's misspellings and grammatical errors).

“Graffiti represents an art form that is unrestricted, one that rebels against conventional forms of artwork. It is intertwined into human history, dating back to the Roman Empires where they were plastered onto walls to make political statements and satirize current events.”

This is an example from a collection of ancient Roman graffiti immortalized in ash at Pompeii, which shows that people are the same, no matter where, or when, they live.

As culture has evolved over the millenia, so has art (including graffiti), and what we leave behind tells a story for those who follow….

Modern graffiti achieves many of the same things as ancient graffiti – to state a message that doesn’t necessarily fit into the norms of society.

Graffiti is a visual language about culture

What can you interpret from this wall?

What is the message here?

Trains! …but, why trains? Trains made their way all over the city, providing maximum exposure and a kind of communication channel.

Where did modern graffiti get its start?

GRAFFITI CAN BE VANDALISM SO YOU NEED TO KNOW THE DIFFERENCE.

When graffiti artists “tagged” places, this was a way of them “marking their territory”– specifically in places you cannot “purchase” (i.e. public property). THIS IS VANDALISM AND IS ILLEGAL… DO NOT DO IT.

UNLESS YOU ARE DOING GRAFFITI ON AN ART SURFACE (PAPER, CANVAS) IT IS ILLEGAL SO DO NOT DO IT UNLESS YOU HAVE PERMISSION OR ARE COMMISIONED (HIRED) TO DO A PIECE OF GRAFFITI ART.

There will always be a debate, so keep it appropriate!

Again, WE ARE LEARNING ABOUT IT BECAUSE IT IS STILL A HISTORICAL ART FORM THAT HAS EVOLVED OVER TIME.

Suppose that Leonardo, Monet, Picasso, or any of the recognized artisans of Western European culture were alive in the present day. Then, suppose that one of these famous artists decided to paint a masterpiece on the side of your house or on your front door or on a wall in your neighborhood. Would Picasso or Monet's markings be graffiti or art or vandalism or graffiti art?

markings would qualify as vandalism only

if they appeared on private or public property without permission

. The same answer holds for the present day, genre of graffiti known as graffiti art.

What message does this give us about the city of Philadelphia?

do this on paper?

here are just too many styles of graffiti lettering to name them all. Even if they all had names, they tend to morph and combine when they’re used, making it very difficult to say with any certainty what style a particular piece is done in.

Let’s look at an example:

Outline the letters you have written to approximate the style you are going for.

Vary the line thickness. You can make all lines the same thickness, then add shading and a 3D effect if the lines get thicker and narrower in different places.

Add details with light pencil. (A lightning bolt for the dot of an “i”, eyes peering out of the holes in your “B”, a bubble around the whole name ….) The possibilities are limited only by your imagination.

Blacken your pencil lines. Use marker to darken the lines drawn with your pencil.

Add color! Fill in your letters and background with colored pencil 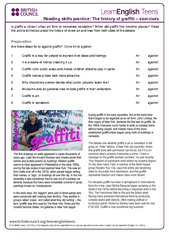