Rose University of Washington Tacoma USA EXTENDED ABSTRACT This study examines the influence of animosity on the evalu ation of foreign products across subcultures Previous studies have focused primarily on animosity across nations eg Ettensen and ID: 35757 Download Pdf

at national average(NIS9,000-NIS15,000 [US$2,000-US$3,333]),and 15.2% and 17.1% for above average (greater than NIS15,000[US$3,333]) (Israel Bureau of Statistics 2002).Multi-item measures were used to measure all constructs.Animosity measures feelings of hostility toward a nation (Klein etal. 1998). Consumer ethnocentrism measures the view of things inwhich oneŐs own group is the center of everything (Shimp andSharma 1987). The product judgment scale measures the perceivedquality and workmanship of a countryŐs products, while the will-ingness to buy scale measures the receptiveness of consumers tobuying products from that country (Klein et al. 1998). The reliabil-ity coefficients for all these scales exceeded .70 for both groups.The overall pattern of means generally reflected our inten-tions. Animosity was higher among Arab Israelis toward Britainthan Jewish Israelis and levels of animosity toward Italy did notdiffer (as was intended).The relationship between variables was examined next. Ani-mosity was related to an unwillingness to buy across all fourcontexts. In other words, an individualŐs feelings of animositytoward a nation decreased oneŐs willingness to buy goods from thatnation regardless of the subculture examined (Arab or JewishIsraelis) or the target nation (the UK or Italy). Similar effects wereobserved for consumer ethnocentrism, which was related to bothanimosity and an unwillingness to buy products from both the UKand Italy. Thus, consistent with previous research (e.g., Ettensenand Klein 2005; Klein et al. 1998; Nijssen and Douglas 2004;Witkowski 2000), animosity and consumer ethnocentrism consis-tently contribute to unwillingness to buy at the individual level.Other effects, in contrast, were context-specific and onlyobserved when examining Arab IsraelisŐ animosity towards the This sense of kinship with fellow Arabs may 11 (4), 5- in

Download Pdf - The PPT/PDF document "Latin American Advances in Consumer Rese..." is the property of its rightful owner. Permission is granted to download and print the materials on this web site for personal, non-commercial use only, and to display it on your personal computer provided you do not modify the materials and that you retain all copyright notices contained in the materials. By downloading content from our website, you accept the terms of this agreement. 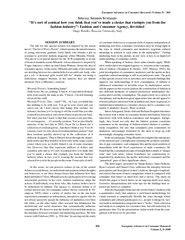