We address the problem of understanding an indoor scene from a single image in terms of recovering the layouts of the faces oor ceiling walls and furniture A major challenge of this task arises from the fact that most indoor scenes are cluttered by ID: 42190


DownloadNote - The PPT/PDF document "Discriminative Learning with Latent Vari..." is the property of its rightful owner. Permission is granted to download and print the materials on this web site for personal, non-commercial use only, and to display it on your personal computer provided you do not modify the materials and that you retain all copyright notices contained in the materials. By downloading content from our website, you accept the terms of this agreement. Decomposing a Scene into Geome
103

Decomposing a Scene into Geometric and Semantically Consiste

Decomposing a Scene into Geometric and Semantically Consiste The Anatomy of a LargeScale Hy
152

The Anatomy of a LargeScale Hypertextual Web Search Engine S

The Anatomy of a LargeScale Hypertextual Web Search Engine S 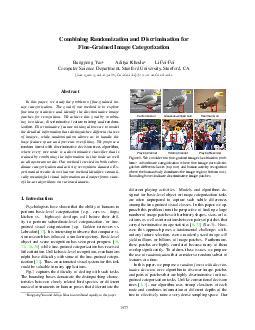 Combining Randomization and Discrimination for FineGrained I

Combining Randomization and Discrimination for FineGrained I