sammut fangpoheflinderseduau Abstract The Chip Multiprocessor CMP architecture offers dramatically faster retrieval of shared data which is cached onchip rather than in an offchip memory Remote cache requests are handled through a cache coherence pro ID: 22700

DownloadNote - The PPT/PDF document "Formal Verification of a Novel Snoopi ng..." is the property of its rightful owner. Permission is granted to download and print the materials on this web site for personal, non-commercial use only, and to display it on your personal computer provided you do not modify the materials and that you retain all copyright notices contained in the materials. By downloading content from our website, you accept the terms of this agreement. 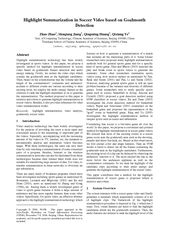 ccer Video based on Goalmouth