Brad J Sagarin Kelton VL R hoads and Robert B Cialdini Abstract Although psychologists have long recognized the havoc that a discovered lie can wreak on a relationship this study indicates that even an undiscovered deception can bring about negative ID: 74100 Download Pdf

Download Pdf - The PPT/PDF document "Personality Social Psychology Bulletin ..." is the property of its rightful owner. Permission is granted to download and print the materials on this web site for personal, non-commercial use only, and to display it on your personal computer provided you do not modify the materials and that you retain all copyright notices contained in the materials. By downloading content from our website, you accept the terms of this agreement. 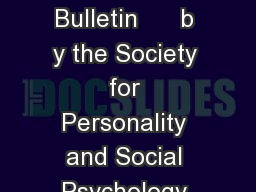 Personality and Social Psychology Bulletin by the PDF document