ifasufledu BLOAT IN RUMINANTS Goats Background In January 2005 the goat population in the United States totaled 25 million heads Of this total 19 million heads were meat goats while dairy totaled 283500 heads In recent years Florida has been rapi ID: 61188

DownloadNote - The PPT/PDF document "Fitzroy Beckford Extension Agent httplee" is the property of its rightful owner. Permission is granted to download and print the materials on this web site for personal, non-commercial use only, and to display it on your personal computer provided you do not modify the materials and that you retain all copyright notices contained in the materials. By downloading content from our website, you accept the terms of this agreement. 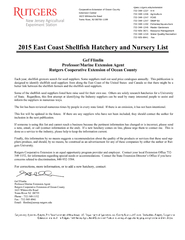 Epsilon Sigma Phi Don’t Leave it on the Table: Scholars

Epsilon Sigma Phi Don’t Leave it on the Table: Scholars