A scene suggestive for our thought is depicted in the fifth chapter of the book of the Acts where the Jewish leaders have before them Peter and ot her of the apostles because they have been preaching Jesus as the Messiah Moreover the Je wish leaders ID: 3166 Download Pdf

Download Pdf - The PPT/PDF document "Shall The Fundamentalists Win A Sermon P..." is the property of its rightful owner. Permission is granted to download and print the materials on this web site for personal, non-commercial use only, and to display it on your personal computer provided you do not modify the materials and that you retain all copyright notices contained in the materials. By downloading content from our website, you accept the terms of this agreement.

Presentation on theme: "Shall The Fundamentalists Win A Sermon Preached by Harry Emerson Fosdick May S"â€” Presentation transcript 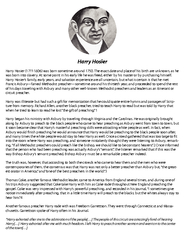 Sermon preached at Bethel Chapel, Luton, by Mr. B. A. Ramsbottom, on L PDF document
61 views