Dichtlsiemenscom Abstract This papers studies methods to improve the cryptographic quality of random or pseudorandom sequences by modifying the order of the original sequence A new algorithm Cryshu is suggested which produces its shu64260ed output da ID: 26732 Download Pdf Study on Pseudorandom Sequences with Applications in Cryptog 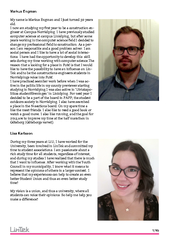 Download Pdf - The PPT/PDF document "Cryptographic Shuing of Random and Pseud..." is the property of its rightful owner. Permission is granted to download and print the materials on this web site for personal, non-commercial use only, and to display it on your personal computer provided you do not modify the materials and that you retain all copyright notices contained in the materials. By downloading content from our website, you accept the terms of this agreement.

Page 1 Cryptographic Shuﬄing of Random and Pseudorandom Sequences Markus Dichtl Siemens Corporate Technology Email: Markus.Dichtl@siemens.com Abstract. This papers studies methods to improve the cryptographic quality of random or pseudorandom sequences by modifying the order of the original sequence. A new algorithm Cryshu is suggested, which produces its shuﬄed output data at the rate of the input data. 1 Cryptographic Aspects of Shuﬄing Random and Pseudorandom Sequences A deck of cards is shuﬄed to arrange the cards in a random sequence. When we have

random or pseudorandom numbers, we may try to rearrange their sequence to make them even “more random”. For streamciphers, the cryptanalyst tries to keep track of the state of the internal machinery which produces the pseudorandom output sequence. The only information he obtains about what is going on internally is from the output data. When the sequence of output data is shuﬄed, his task becomes more diﬃcult, since subsequent output elements do not correspond to subsequent states of the internal machinery. Hence, it is considerably more diﬃcult to draw conclusions from

the output data to the internal state. This eﬀect of making the cryptanalysis harder is only achieved, if it is impossible to determine the original sequence from the shuﬄed one. So one requirement for cryptographically useful shuﬄing algorithms is that it must be infeasible to reconstruct the original sequence when given only the shuﬄed one. We suggest to use shuﬄing as a technique to improve the cryptographic strength of stream ciphers. A sequence of pseudorandom numbers is generated by some algorithm, then shuﬀﬂing is applied to improve the

cryptographic quality of the sequence. The algorithm used to generate the original sequence may be such, that succesful cryptanalytic attacks are possible. In this case, shuﬄing may be suﬃcient to thwart any attacks. Shuﬄing may also be useful for streamciphers for which no feasible attacks are known, to have an additional layer of security. Physical random number generators tend to have correlations between bits generated subsequently. Here shuﬄing turns out to be helpful, since in order to exploit the correlation, an attacker must know which bits are correlated.

For the shuﬄed sequence, the attacker does not have this information, since the correlated bits go to distant positions which he does not know. However, shuﬄing does not help against the most common problem of physical random Page 2 number generators, bias, which means that the probability of a generated bit to be zero is not equal to 0.5 . Since the numbers of zeros and ones in the sequence remains the same when it is shuﬄed, the bias remains the same. 2 Known Methods to Shuﬄe Pseudorandom Sequences Knuth [Knu81] describes two methods to shuﬄe

index into the array. The entry stored at this position of the array is returned as the result, the entry of the array is replaced with the next element of Z1. Algorithm M is suited well for cryptographic purposes, its disadvantage is that half of its random input is used up just for the shuﬄing. Algorithm B does not require an additional sequence Z2 to control the shuf- ﬂing, the sequence Z1 to be shuﬄed also controls its shuﬄing. This can be called self shuﬄing. Algorithm B also uses an array which is initially ﬁlled with the ﬁrst elements of

Z1. The auxiliary variable Y is initialised with the next element of Z1. When an element of the shuﬄed sequence is required, Y is used to determine an index into the array. The entry stored at this position of the array is returned as the result, and it is also used as the new value of Y. Then the entry of the array is replaced with the next value of Z1. Algorithm B is cryptographically weak. Each number generated betrays from which entry of the array the next result will be taken. After a short period of observation, the attacker will know when this entry was changed last; with very

little eﬀort the cryptanalysis of Algorithm B is reduced to the cryptanalysis of Z1. 3 The New Algorithm Cryshu We want to overcome the cryptographic weakness of Algorithm B while keeping its attractive property, that it produces output at the same rate as it reads its input sequence Z1. The new shuﬄing algorithm is called Cryshu (Crypto Shuﬄing). The aim of its design was to leak as little information about its internal state as possible. Like Algorithm B, Cryshu also uses an array to shuﬄe the sequence Z1 of pseudo random numbers. Initially this array is

value of Y. This may sound somewhat complicated, but the next section, which gives Cryshu code in C, will show that it is not. 4 Example Software Implementation in C As an example we give the software implementation of Cryshu in C. The array used has a length of 256 and contains bytes which can be used directly as indices into the array. Z1 also generates bytes. static unsigned char a[256]; static unsigned char Y; unsigned char Z1(void) return rand(); void cryshuinit(void) int i; for(i=0;i<256;i++) a[i]=Z1(); Y=Z1(); unsigned char cryshu(void) unsigned char x,res; x=a[Y]; res=a[x]; a[x]=Z1();

Y=a[a[x]]; return res; The function cryshuinit() is used to initialise the algorithm. Each call of cryshu() returns a byte of the shuﬄed sequence. As an example, the function rand() is used for Z1. Page 4 5 Implementation Considerations Since Cryshu requires an array of considerable size, it is not suited too well for hardware implementation. This is true for shuﬄing in general, since it is necessarily connected with the storage of the elements to be shuﬄed. But Cryshu is suited very well for software implementation. Care should be taken that the array used

ﬁts into the primary cache of the computer. It can run at considerable speed, since the computation of one output element requires only 4 table lookups. There are tradeoﬀs between the array size used, the bit length of the numbers shuﬄed, the data rate achieved, and the security. For example, the 8 bit words used in the example implementation will not give optimal data rates on 32 bit processors. However, it could be unwise to use 16 bit words, and to keep the length of the array at 256. On an SNI Scenic Pro M6 with a 200 MHz Intel Pentium Pro processor, the program given

in the previous section compiled with Watcom C 11.0 shuﬄed at a rate of 2.13 MBytes per second. This is only the time for shuﬄing, it does not include the time used for rand() 6 Open Questions Cryshu leads to many new questions: all broken streamciphers can be reexamined whether they can also be broken when the sequences they produce are shuﬄed by Cryshu. The most important candidates to consider are linear congruential gen- erators, and the numerous broken variants and modiﬁcations of linear feedback shift registers. References [Knu81] D. E. Knuth, The Art of