Download Presentation - The PPT/PDF document "Entrapment in Gothic literature" is the property of its rightful owner. Permission is granted to download and print the materials on this web site for personal, non-commercial use only, and to display it on your personal computer provided you do not modify the materials and that you retain all copyright notices contained in the materials. By downloading content from our website, you accept the terms of this agreement.

To understand the Gothic theme of entrapment, and to consider how and why Bronte uses this convention.

1. Using your own word cloud, generate your own definition of

2. Find 3 (or more) quotations from ‘Wuthering Heights’ which are relevant to this Gothic theme. Be ready to feedback!

Entrapment - Article on handoutEntrapment, a favourite horror device of the Gothic, means to be confined or to be trapped in such a way that there is no way out. It is this sense of there being no escape that contributes to the claustrophobic psychology of Gothic space. The notion of claustrophobia is closely tied up with that of entrapment. Although it is most often regarded as a consequence of physical entrapment, it can also be more generally attributed to a character’s sense of helplessness, or a feeling that one is caught up in some sinister plan or destiny over which one has no control. There are essentially three types of entrapment: physical, mental, and existential. Physical entrapment would mean being physically trapped in some place. A recurring gothic device of physical entrapment is that of the protagonist trapped in a maze of some kind and trying to escape, but inevitably returning to the same spot again and again. An example of physical entrapment can be found in Stoker’s Dracula. When Harker is being driven to the castle of Dracula, he experiences a moment of being physically trapped in the nightmare landscape of the Transylvania, as is evident in his remark that “[it] seemed to me that we were simply going over and over the same ground again; and so I took note of some salient point, and found that this was so” (Stoker). Another example of such entrapment is found in Smith’s A Rendezvous in Averiogne. In this short story, the protagonist Gerard is trying in vain to escape from a forest; he returns, inevitably, to the same spot every time. Eventually, “[his] very will was benumbed, was crushed down as by the incumbence of a superior volition” (Smith). Mental entrapment, on the other hand, is about being confined to a certain state of mind. The gothic trope of madness, for example, is a form of mental entrapment. In a way, the insane are trapped in their own mental universe, into which no one else can penetrate. Renfield, in Dracula, is doubly entrapped; physically locked up in an asylum, he is also limited to the confines of his mental universe, doomed to be continually misunderstood by Seward, or simply dismissed as insane. Lastly, there is also existential entrapment, which takes the form of social entropy and ontological or epistemological entrapment. An example of existential entrapment can be found in Stevenson’s The Strange Case of Dr Jekyll and Mr Hyde; Dr Jekyll feels trapped by societal notions of respectability, by a constant pressure of having to uphold his reputation as a gentleman in the eyes of the Victorian public. As a way of breaking out of this ‘prison’, Dr Jekyll invents the figure of Hyde. Hyde is therefore Jekyll’s liberator, for it is as Hyde that Dr Jekyll can truly express himself, unbound by considerations of maintaining his respectability. (Esther Leong, 2004)

INDIVIDUALLY READ THE ARTICLE WHICH EXPLAINS ENTRAPMENT IN TERMS OF THE GOTHIC.

C) IN NEW PAIRS, USE YOUR DICTIONARY TO FIND THE MEANINGS OF ANY VOCABULARY YOU DO NOT UNDERSTAND. HOW DOES THIS ADD TO YOUR UNDERSTANDING OF THE ARTICLE?

You will each be given an article extract, about

to the theme of entrapment.

You need to annotate your ideas around the extract:

How does this extract raise the theme of entrapment?

raise this theme in this example? What is the effect?

Now, when your extract is shown, get into groups

with those who had the same extract

B) note others ideas onto your own extract

C) prepare to present your ideas as a group

(“This extract depicts entrapment for this purpose...”)

‘Confinement, control and entrapment’. To what extent do the characters of Wuthering Heights experience this gothic feature? 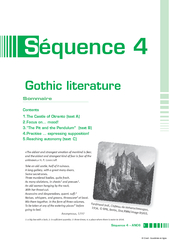